Call nowTrip Planning
We are open on our normal schedule and regular operation for the 2023 summer season.
Skip to content
Loading...
Early Daysanglerfishmarketing2018-03-22T19:45:10+00:00

“Shan had dreams of living in the wilderness full time.” 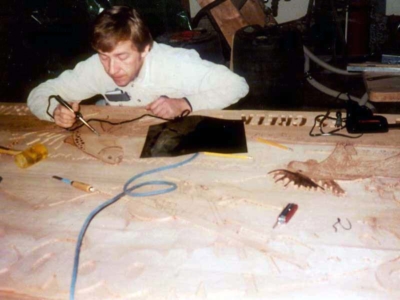 The fall of 1990 was a glorious one. The season was over; it was sunny and warm with the fall colors in full bloom. Summer was at an end and it was time to put all the fishing gear away and close up the lodge for winter. Shan was feeling quite sad about going back to the hustle and bustle of Anchorage, when the quiet season of freeze up was coming to the lodge. She had dreams of living in the wilderness full time.

Our small community of Eagle River had grown since Eric’s childhood in the 50’s and 60’s. You didn’t even know your neighbors anymore, nor have time to know them. The schools were getting crowded; the kids were beginning to be influenced by the wrong ideals. I hear about what is happening in our “once small community of Eagle River” now in 1996 and am so thankful the LORD made it possible for us to move to the wilderness. It was too late to make the move that fall, but plans were made to move the family the next spring.

The house in Eagle River was advertised for rent in March of 1991 in hopes of having it rented by the end of May. We loaded up a semi-trailer with what we wanted at the lodge and stored the rest. The trailer was hauled to the Deshka Landing in late May and Eric spent the summer hauling everything up the river in his homemade barge.

Yes, building was in his blood and it even expanded to boat building. The barge was his first attempt and later built two other boats that are still in use. The barge has been added to and modified over the years and is now a full time business for Eric, hauling freight for others building cabins and fuel for other lodges and us. Finally, our home was rented in July, so a sigh of relief was breathed. We were set for the first winter of our new lives as a “bush” family.

Learn how the Johnsons became a “Bush” Family