Call nowTrip Planning
View our update on Covid-19 and our Alaska summer operations. To date, we plan to open on our normal schedule and regular operation for the 2022 summer season.
Skip to content
Loading...
Historyanglerfishmarketing2018-11-10T21:38:19+00:00

The History of  Northwoods Lodge

“When you come to stay with us, expect our home to be your home.” 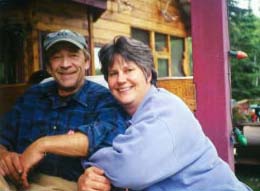 The beginnings of Northwoods Lodge for Eric and Shan Johnson and their four children began in 1983. Eric, a lifetime Alaskan, had been a General Contractor and part-time Alaskan hunting guide since his graduation from high school in 1969. Shan was born in Washington State and moved to Alaska in 1962 with her mother and step father. She has lived here ever since except for summer visits to her dads in Washington when she was younger. Eric & Shan met in 1970 and were married in 1973.We had our own plane, varying in size as the family grew, always venturing out into Alaska’s wilderness for fishing, hunting and camping.

We bought some land on a lake in the late 70’s and built a cabin. At first we were the only cabin on the lake, but after a few years the surrounding land was open by the state for public purchase. By this time we had upgraded to a Cessna 180 in order to have room for our two kids, Brent and Tyson. We had always left our cabin unlocked in case someone was in need of shelter, but people began abusing that generosity including the local bear population. We sold the cabin in 1982 and began our search for another getaway location.

The fabulous Northwoods Lodge started life as a tent in the wilderness. During Eric’s many years of flying and fishing the area where Northwoods Lodge was built, he had spotted this piece of land and fell in love with it. He contacted the State Land office and obtained the name of the owner in Oregon. Made contact with him and (it must of been meant to be) he had just put the land on the market with a local real estate company. We bought the scenic location and spent our summer weekends of 1983 in a white wall tent, clearing a place for the cabin. 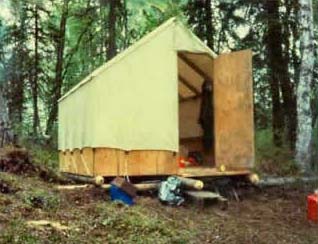 We had now upgraded to a brand new Cessna 206 with the addition of another child, Stacy, in February. Eric was still in home construction, so we didn’t have much time in the beginning to come out to the property. The only way to get to the property was by plane at 40 minutes or by boat at 5 hours.

We needed to get building materials (70,000 lbs.) to the sight, so we hired a local barge to haul most of the building materials. The remainder of the freight was hauled out in an airplane called a Caribou. It landed on a small sandbar airstrip 3 miles downriver from our property. This plane is no longer flying as it crashed and killed the pilot and crew back in 1990. No other plane in the world could haul as much and still land on a small airstrip. We would have to boat the materials from the strip to the property, making many trips. Eric freighted supplies up the frozen river, 60 miles, by snowmobile and spent many nights at -20° to -30° camped out in the un-insulated cabin with the woodstove cranked. That winter he got the cabin insulated and sheeted with plywood. That next spring we hired some neighbors that lived in the area year round to paint the inside of the cabin.