Call nowTrip Planning
View our update on Covid-19 and our Alaska summer operations. To date, we plan to open on our normal schedule and regular operation for the 2022 summer season.
Skip to content
Loading...
The Fishanglerfishmarketing2022-06-01T21:16:17+00:00

The Fish at Northwoods Lodge 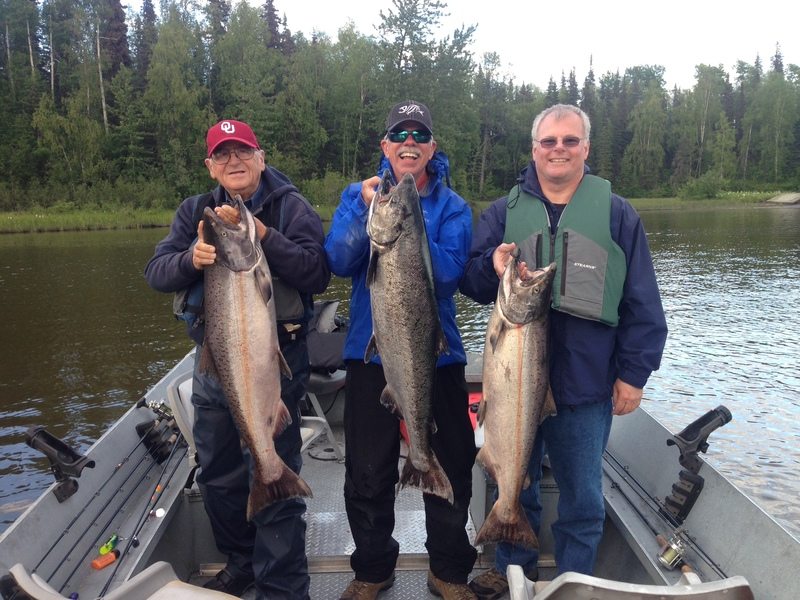 Because of their size and fighting ability, King Salmon are always one of our most popular game fish. Early season fishing is generally done from boats and consists of casting plugs and spinners or back trolling plugs or spin-n-glos. Low run-off years can provide excellent opportunities for Kings on a fly rod. King Salmon fishing is currently catch and release.

By mid June, Kings have established themselves throughout the tributaries. We fish them over a broad range of water either by back trolling, bank fishing or sight fishing.

Late June and July the Kings are concentrated in the deeper pools where they will eventually spawn. At this time, almost all fishing is from the bank using strike indicators to detect the subtle takes.

While kings are large (15#-60#) they are not difficult to land with the proper techniques. Most anglers tend to use way too much pressure and try to force the fish into submission. With light but steady pressure (try to get downstream of the fish) they will normally remain in the hole where hooked. All salmon instinctively want to go upstream if possible, or at least remain where they are (it took them a lot of effort to get there). Putting on excessive pressure will make them mad and cause them to turn downstream and run. If you can’t chase by boat, the odds are now in the King’s favor. 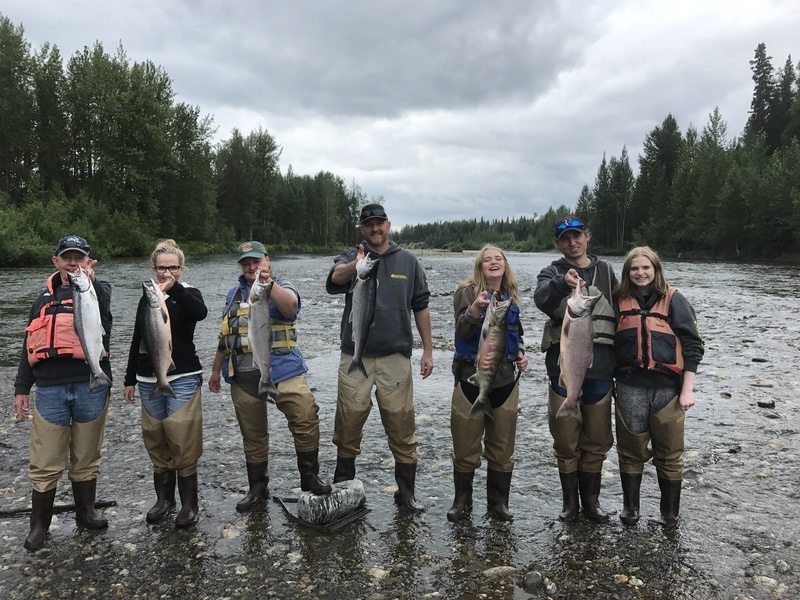 To many anglers, this is their favorite time because of the variety and non stop action that can occur. Beginning about the 20th of July, sockeye salmon begin arriving in large numbers. With the exception of chums, we believe sockeyes, pound for pound, are the hardest fighting salmon. Fishing is always from the bank using fly or spin fishing gear. Anyone can catch sockeyes on a fly rod with very little instruction as no actual fly casting is involved. Good quality polarized glasses are a must during this salmon run.

Even numbered years bring large runs of pink salmon and large catches can be had casting small spoons and spinners as well as flies.

At about the same time, chum salmon start to arrive and run through mid to late August. They are very susceptible to chartreuse colored flies and lures and herring wrapped plugs. Chums are our second largest salmon and while not as good for the table as Kings, silvers and sockeye, they will wear you out with bulldog fighting strength.

Late July through August is silver salmon (coho salmon) time. 7-14 pounds of aggressive aerobatic fury. We fish early silvers with bait (salmon roe) mid to late with spinners and flies. 20 to 60 fish per day are possible. Fishing late season silvers on the surface with hot pink deer hair poppers can be the ultimate silver experience. 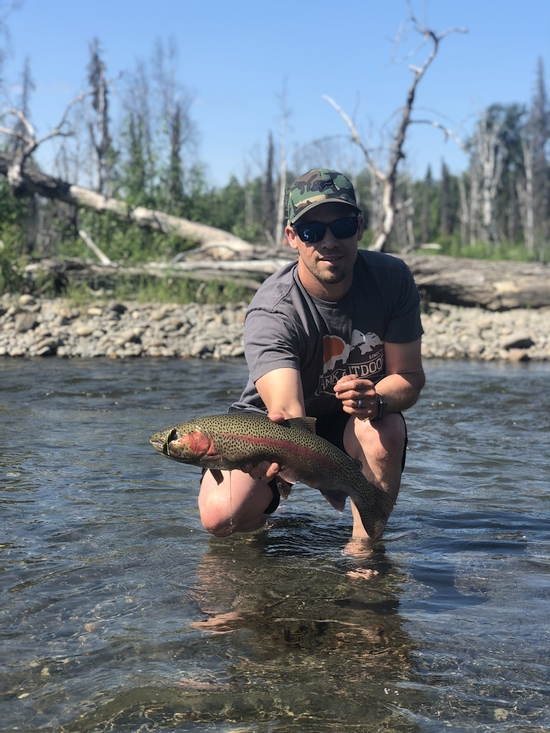 Kings are beginning to spawn, so egg patterns become the lure of choice for both spin and fly fishermen. Find spawning kings and the trout will be right behind them.

Beginning in late August all the salmon start the spawn cycle. Food is abundant for them (salmon eggs) so just match the size and color of eggs. Find spawning salmon, dead drift an egg pattern or bead to them using a strike indicator and hang on. No freshwater fish in Alaska has more power and durability than a fat fall rainbow. Rainbows here are some of the most brightly colored in the state and run from 12-30 inches.

Once the first spawning salmon begin to die, we switch to flesh patterns for both fly and spin fishing. Light spinners can be very productive also. Late afternoons can produce large rainbows on mouse patterns skittered on the surface. By late September or early October, the water temperatures have dropped and all the rainbows in Lake Creek move into the Yentna to winter. At the same time, all the Arctic Grayling in Lake Creek that spent the summer spawning in the upper tributaries begin an out migration into the Yentna River. This is the best time of the year for large 15 to 20 inch grayling.

We would enjoy showing you this world class fishery and the tried and proven best techniques. We practice catch and release to sustain the fishery.

Northern Pike are available all season with the largest fish caught when the water is cooler in early June and late August and September.
Northern’s are fun to fish for and are great eating if you know how to get the Y bones out.  Our guides are proficient at it and a great fish fry awaits you at Northwoods Lodge.  Jitterbugs, Johnson silver minnows, rubber leeches and baud with bobbers work well. 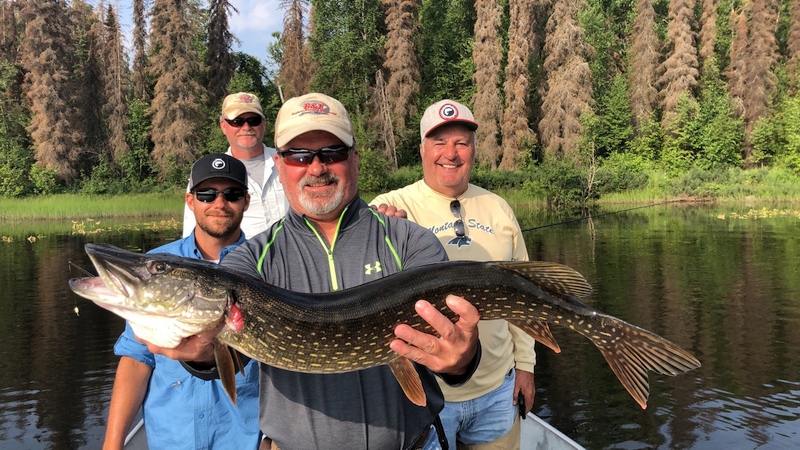